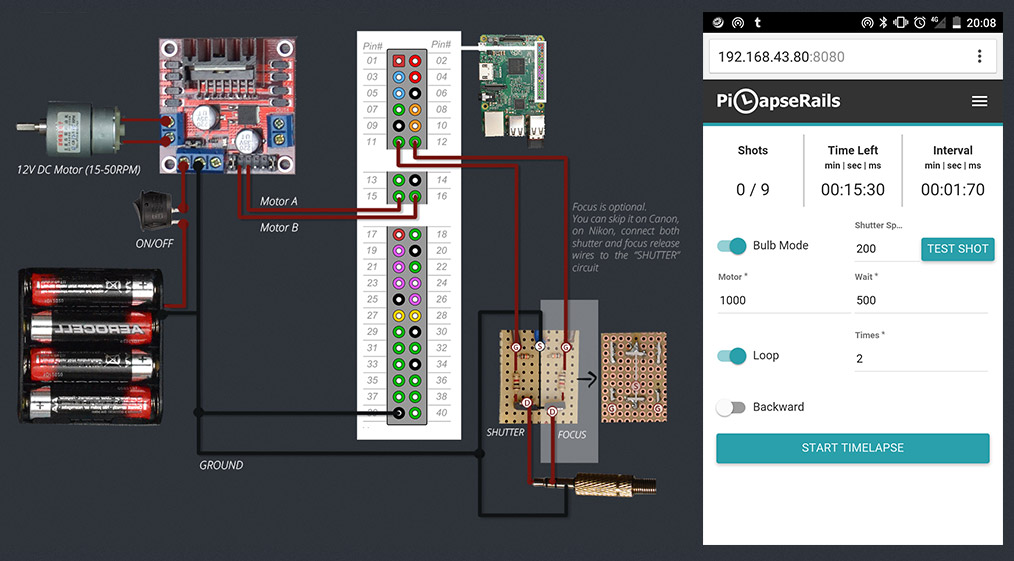 Spent some time building a motorized time lapse rails using raspberry pi… and then used even more time writing the software for it :)

When looking into time lapse rails, i ran across I ran across David Hunt’s post on building a DIY version using raspberry PI. The article was quite nice with a lot of information on the hardware… i however did not want to buy an extra touch screen as was used in that build and running it through command line sounded pretty insane, so i went on to a quest to do something about it :) A couple of evenings later, there was a solution… i put together a little web app that runs on a nodeJS server on the PI which can then be accessed through the browser on your mobile device if it is sharing its wifi with the raspberry.

And since i also had hell of a time trying to piece the whole picture together when building the hardware, then i also figured i should create a dumb down guide which someone with very little knowledge on the subject should be able to follow (there was lots of information on david’s post but it was pretty scattered between 3 posts on several pages, with some info in the comments section and some completely missing… so i had to figure a lot of things out on your own and fill in the caps where i was missing missing something)

The software i built can be found in here:
https://github.com/equilerex/PiLapseRails

on that page you can find all the steps you need to go through to get it running on your raspberry along with some more information on how it works/can be used, etc.
in general, theres a few worthy features: 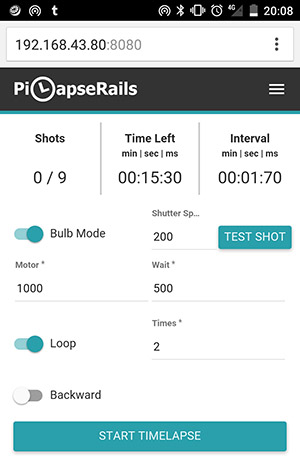 Heres an overview of how the software works:

And heres a sample of some time lapses ive done: 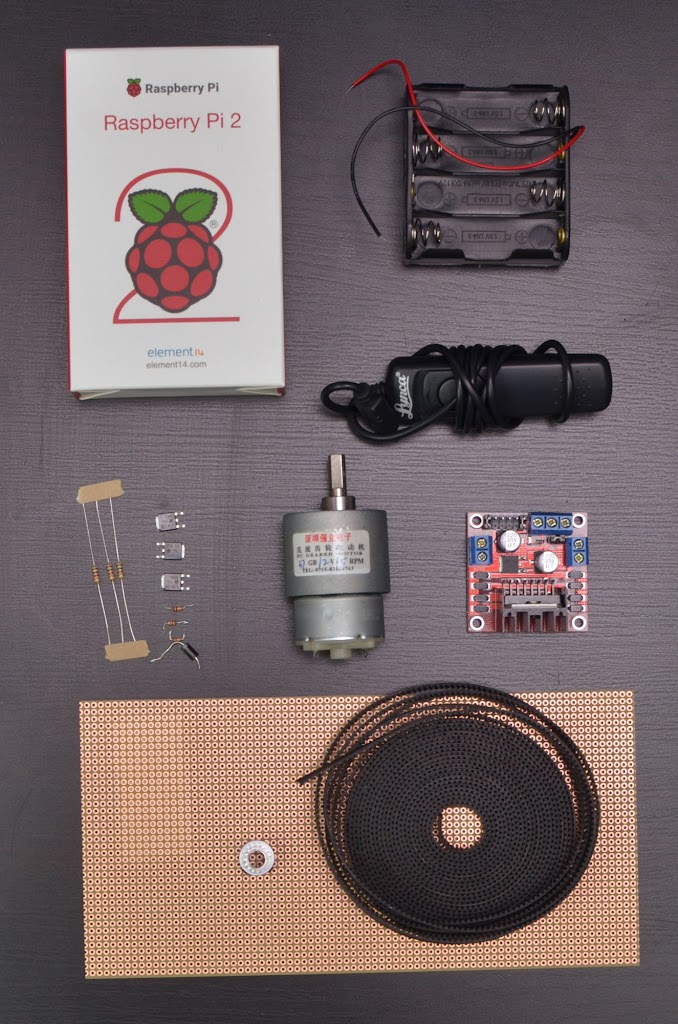 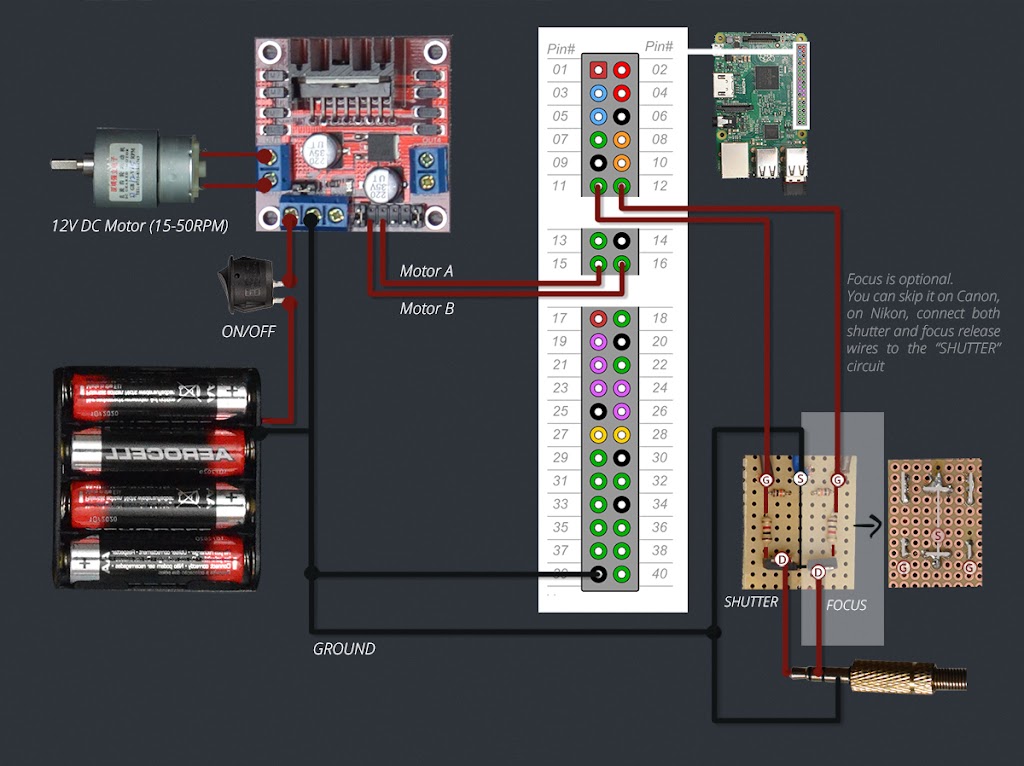 In my layout, there is one extra circuit for “focus”  since david referenced Per Magnusson who claimed that Nikon’s remote trigger is trickier than canon and you need to trigger focus,wait for 300ms and then trigger shutter…
maaaybe it depends on your model but in my case (Nikon D7000),  it was enough to just connect both focus and shutter of the remote cable to the shutter circuit and as long as the camera was set on manual focusing mode (on the lens or body), it had no problems shooting…
Since i did have the circuit built already, i still left it in and added the logic to the software so you can even select how long you want to focus (maybe if you wanted to use auto settings in case lighting condition were changing a lot?)  although the actual lens focus should really be off on time lapses since it is really visible if it shifts around… (been there, done that, had some ruined footage)
If you are planning to be shooting on manual (which you should) then just screw the focus part and ignore it on canon, while on nikon, just connect both focus and shutter to the shutter circuit. As for the rest of the cameras brands… who knows?

The trickiest thing for me in the whole electronics build was figuring out how to connect the mosfet transistor since on normal electrical diagrams (meant for people who actually understand the stuff) the transistor symbol looked very similar to the actual component along with its 3 legs but they really did not reflect the reality… theres a a specific way to read it instead, which i could not get my head around for a while :P
All you need to do is look at the technical document for your specific component to see which of the 3 legs are source, gate and drain. Drain is basically positive, source is negative and “gate” is what enables/disables the connection when power is applied to it

the whole circuit should look like this (the mosfet image is specific to the one i used… they should be more or less similar but check your technical doc first.. often on ebay or google the model number): 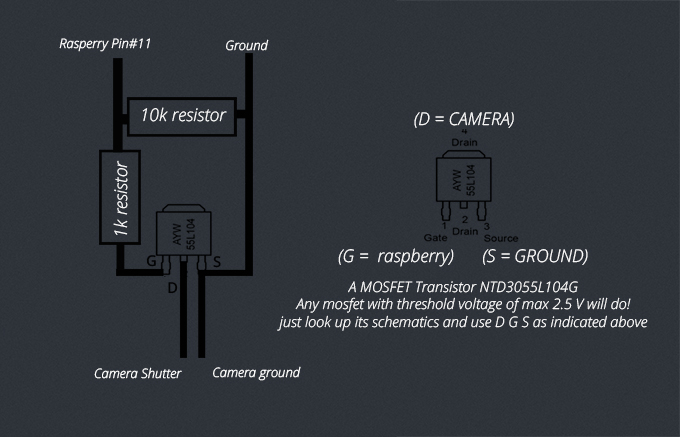 and to give an idea of the size of the components: 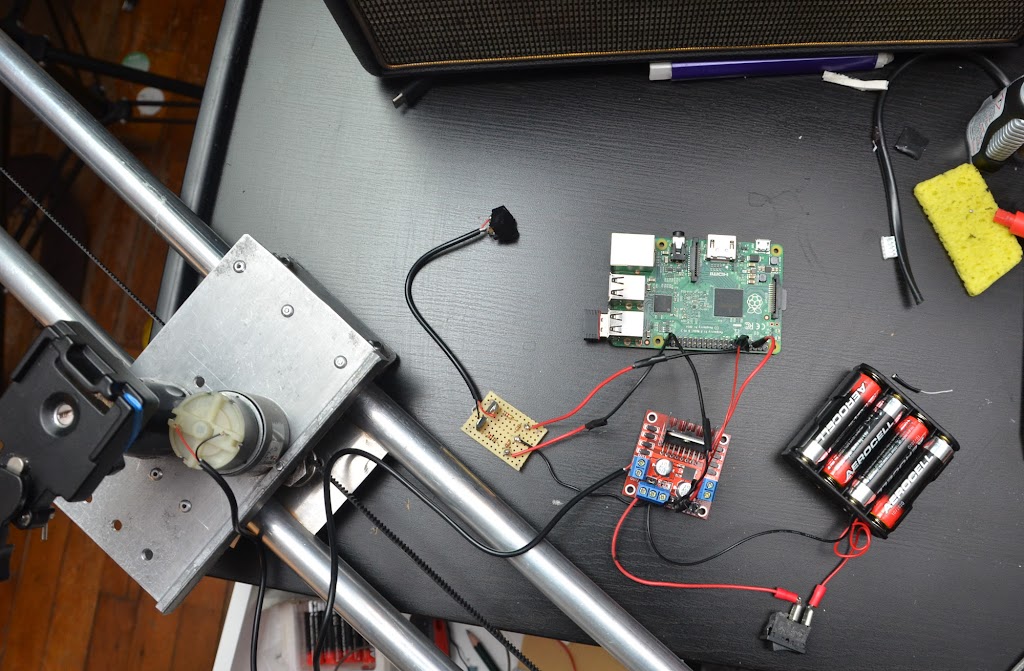 This really depends on what tools and materials you have in hand…  in general, you should have at least a drill, few drill bits and the basic stuf like pliers/monkey wrench, etc

In my mind, the cleanest and most stable way of doing the rail is to got to the local hardware store and get:

Now cut 2 pieces of the square tube, mine were 12 cm but up to you, mark the center line and make holes at exact same distance on each piece.. then you can slide the pipes through them and to make it more solid, drill vertical holes for each tube and add polts/nuts to fasten it all up 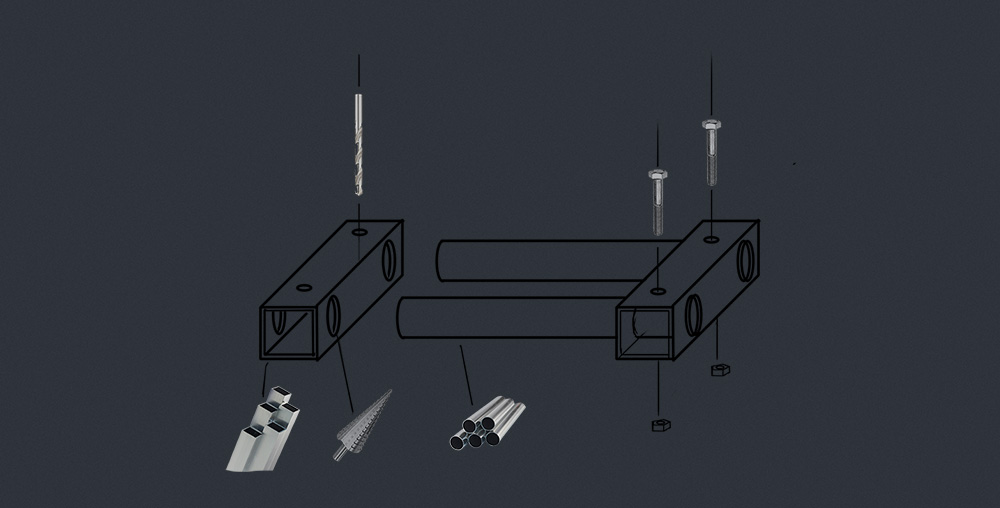 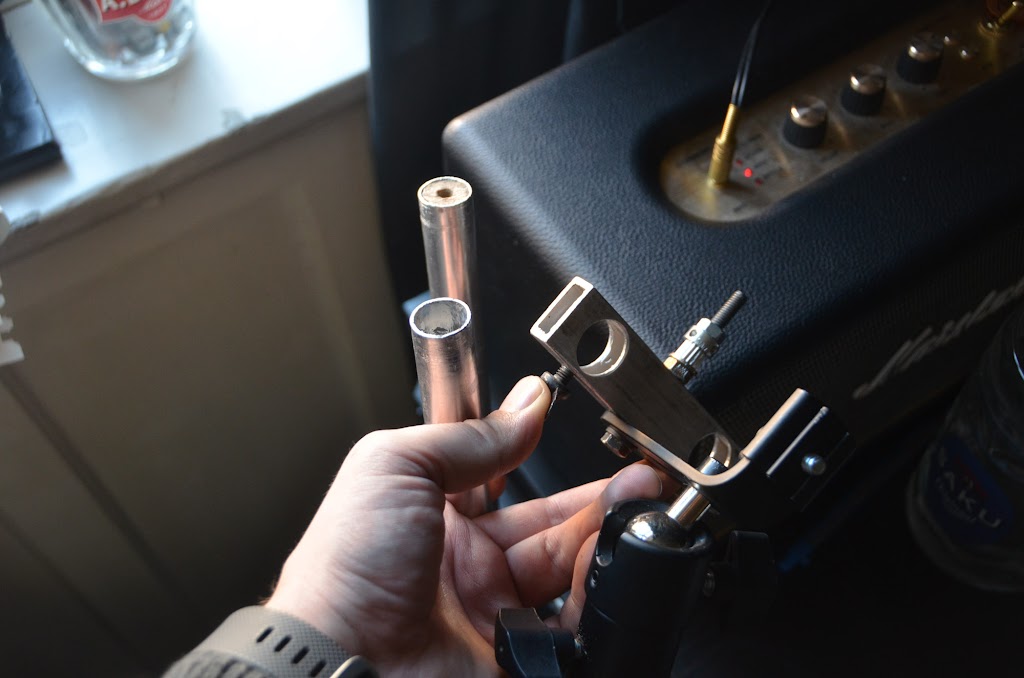 As for the slider itself, you can invent what ever the hell you want (which i did) but in retrospective, i think the easiest and most professional looking solution would have been to just order linear ball bearings (didnt know about them until my friend saw what i had done and then pulled one out of his tool box and said “this could work as well”) 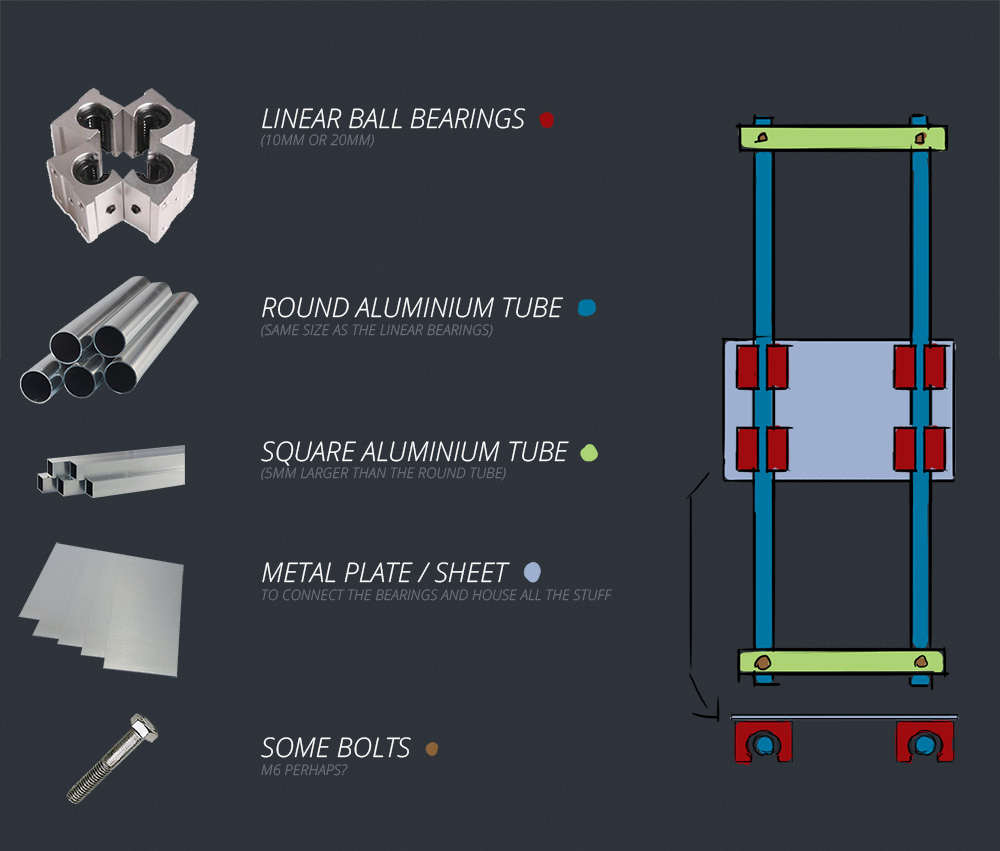 In case you want to cheap out instead and build something on your own, theres many ways, heres a few of my ideas for the layout: 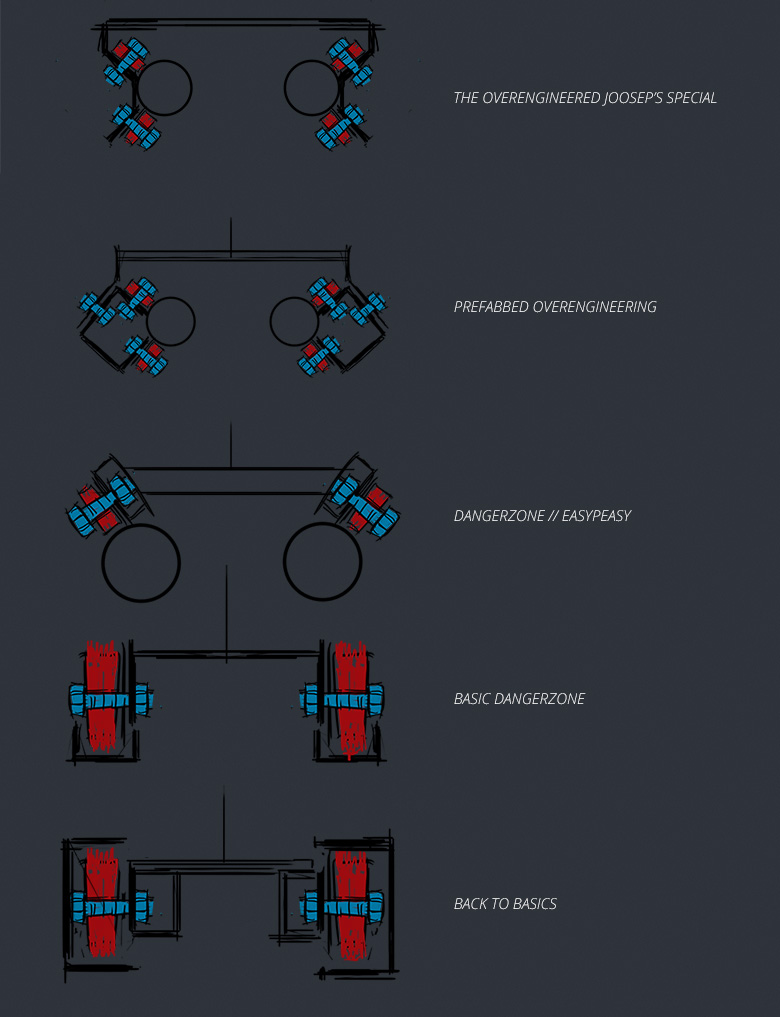 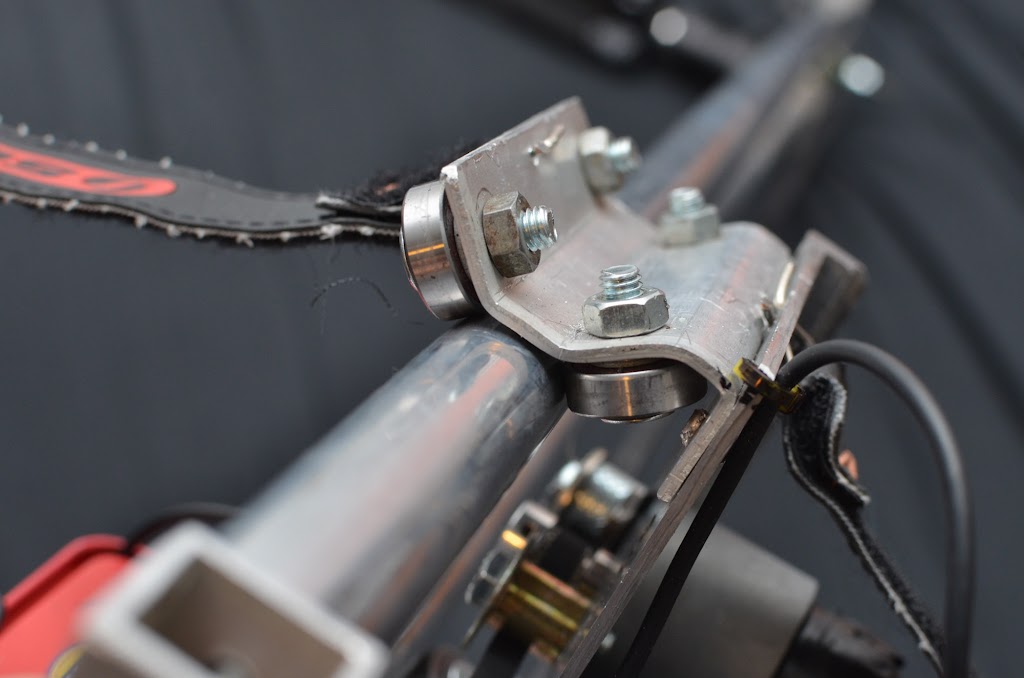 And to attach the belt, just use some more bolts and the mounting is totally up to you.. .you can use some static legs, extra tripods, environment, etc 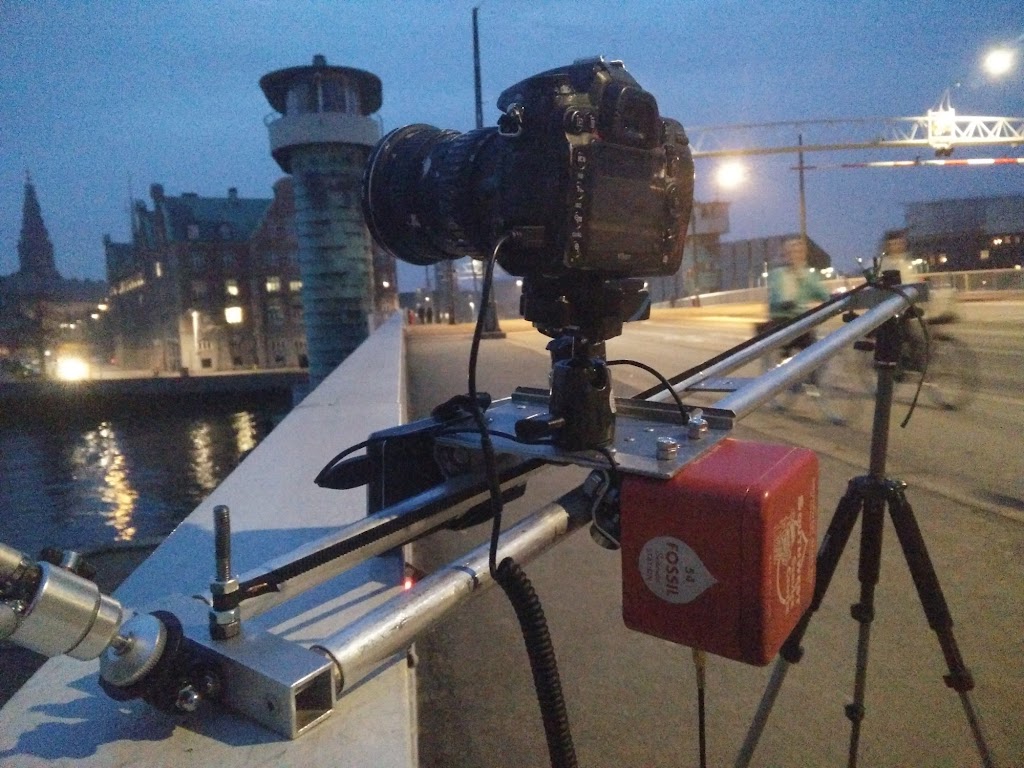 The pulley part itself is fairly simple.. i drilled the engine through the slider plate, attached it with a screw, then i had 2 ball bearings placed a bit lower to create create tension and guide the belt so it would have enough friction to pull heavy loads 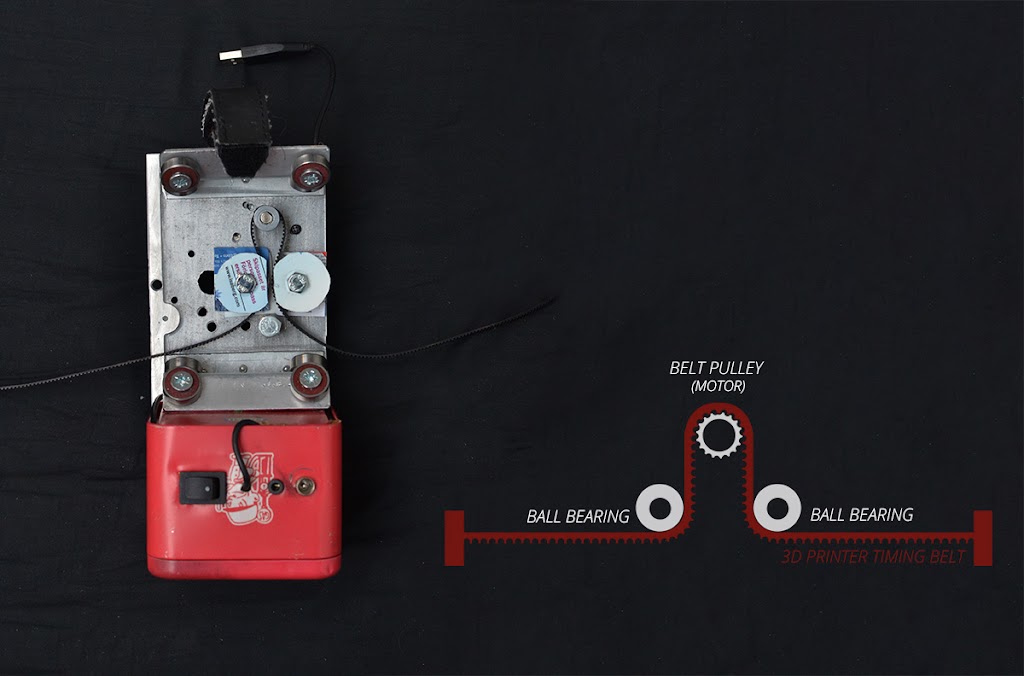 in case the system you build is in one piece, just attach the belt permanently. i do that on one side by “stitching” the belt with a solid copper wire but since my system comes apart in order to pack it into a smaller form (the rails can be screwed in half!) then the other side i just fasten with a paper clamp around a spare pulley which creates some extra tension… still trying to come up with a better solution but it works for now. 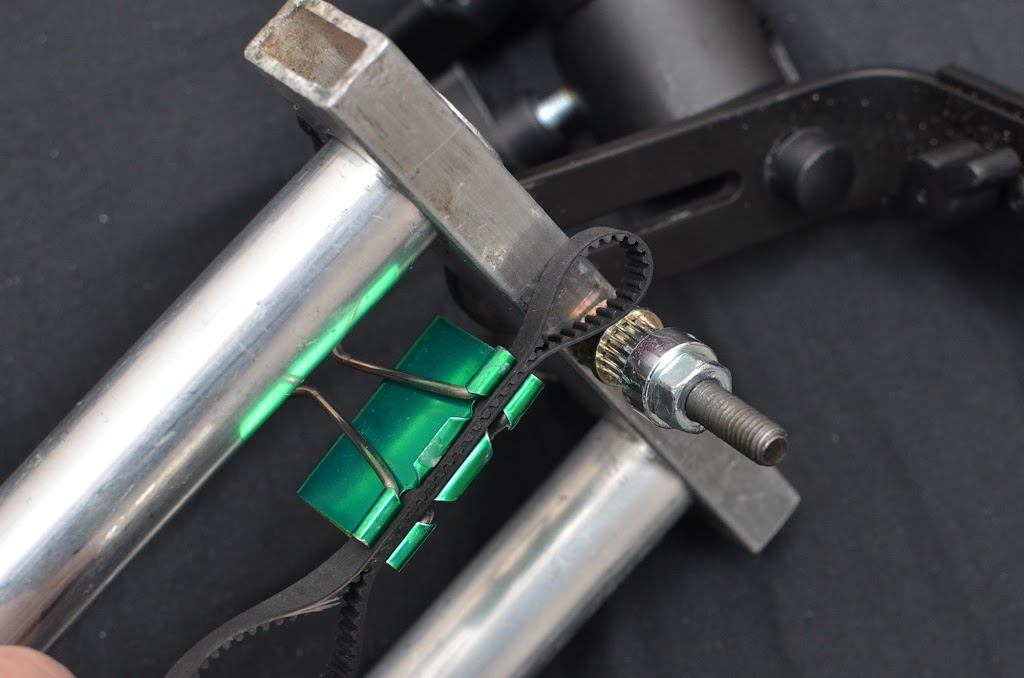 For housing all the electronics, i used a tin box that my wristwatch came with… fairly easy to work with and with all the plugs and switches in the bottom, it is fairly weather proof… just need to make sure that all the circuit boards are isolated since the metal body is able to conduct current! 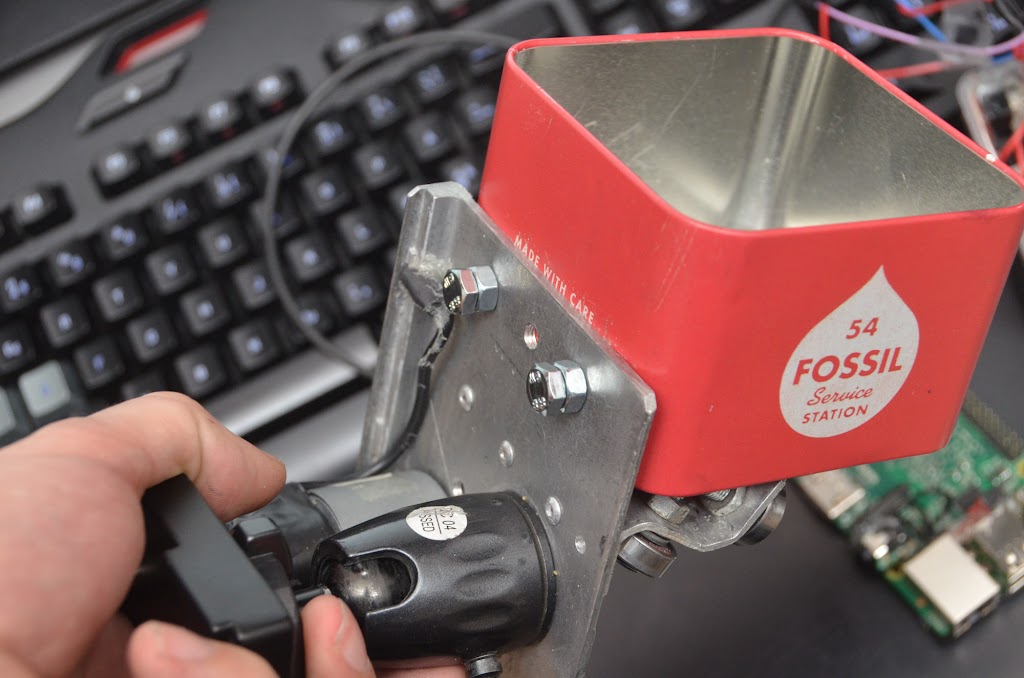 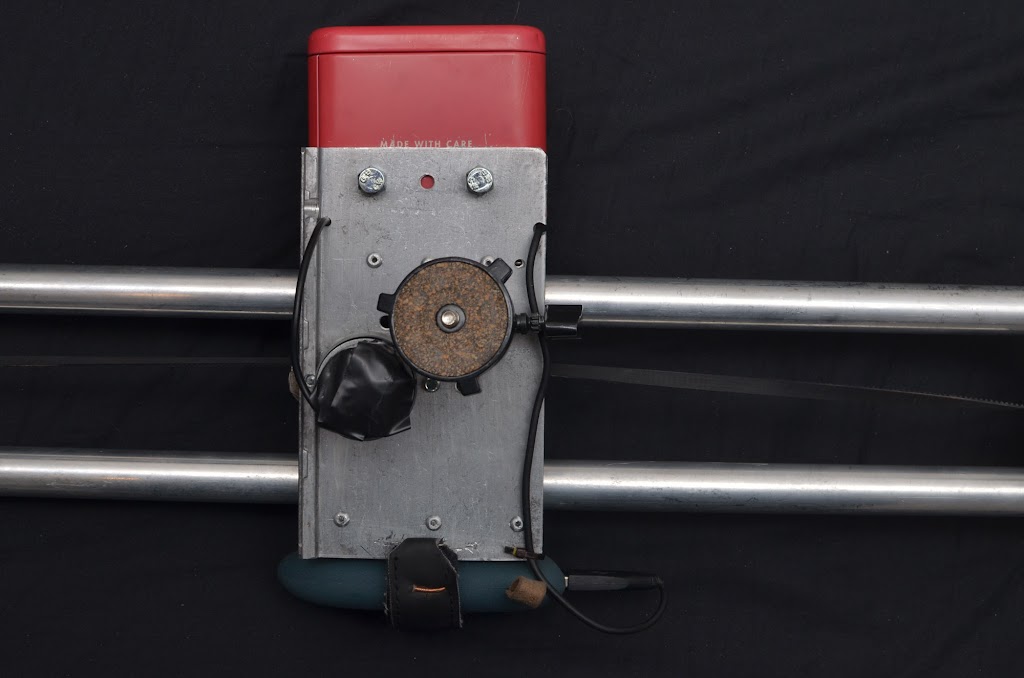 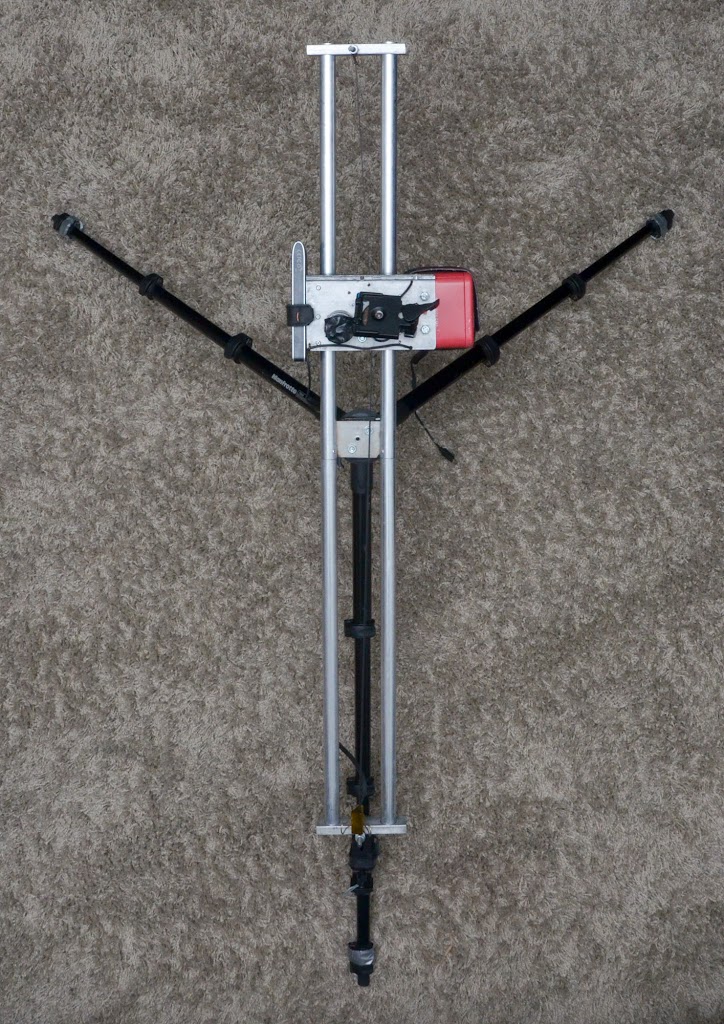 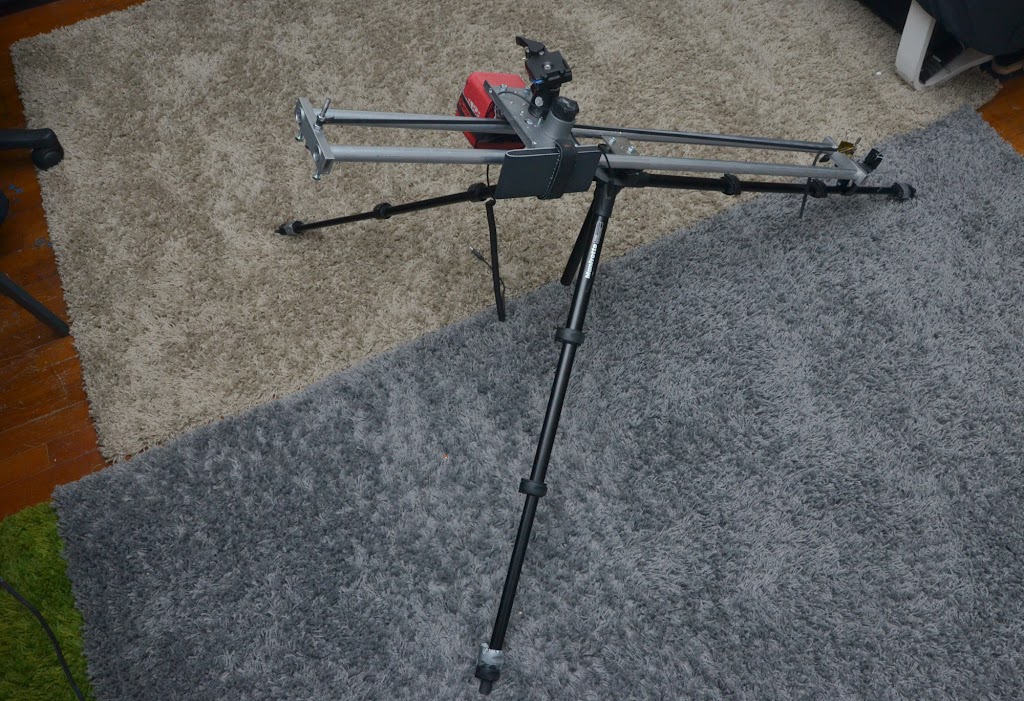